I am very humbled and thankful to see that so many people and respected publications saw this situation for what it is. On behalf of all of the independent artists, we want to thank everyone who supported us.

There is a significant part of the story that is missing in the shared articles and I want to fill in the blanks so you can see it through our eyes.

On September 17th, my colleague and friend, professional Makeup Artist Vlada Haggerty (@vladamua on Instagram) and I got together for our regular creative collaboration. We usually have an idea for each photo shoot, but this time we both had been very busy and did not prepare in advance, so we decided to wing it. We had no reference imagery, no idea, no plan. The sole purpose of our non-commercial shoots is to practice our craft, explore our creativity and hopefully add new beautiful work to our portfolio, which will help us win new clients and get new work.

Like most independent and driven artists, we work really hard creating new work, growing our social media following, trying to get our images seen by our future clients. Every re-post, every tag matters.

I had been wanting to shoot a “See No Evil. Hear No Evil. Speak No Evil” beauty story, in which we could showcase the eyes, the lips and a full face makeup in separate frames. The reds and gold sounded festive, so we went for those colors in the name of the upcoming holiday season.

I loved the glossy Ombré lip design that Vlada and I did before, but never released those images, so we decided to re-create that again: 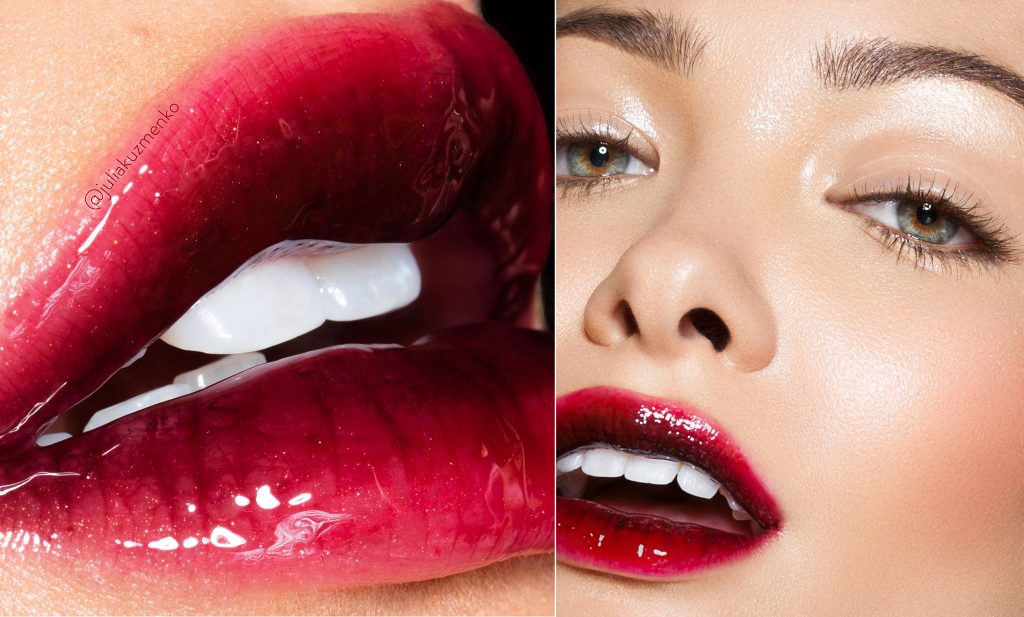 For the whole duration of the shoot we would throw ideas at each other and combine whatever we both liked, so we ended up with the story:

And more reds and golds:

I posted the See No Evil image on my Instagram on September 23rd, 2016. And the following post was an Anastasia Beverly Hills image that I retouched for the company. I tagged the team who created that image, including the photographer Marcelo Cantu: 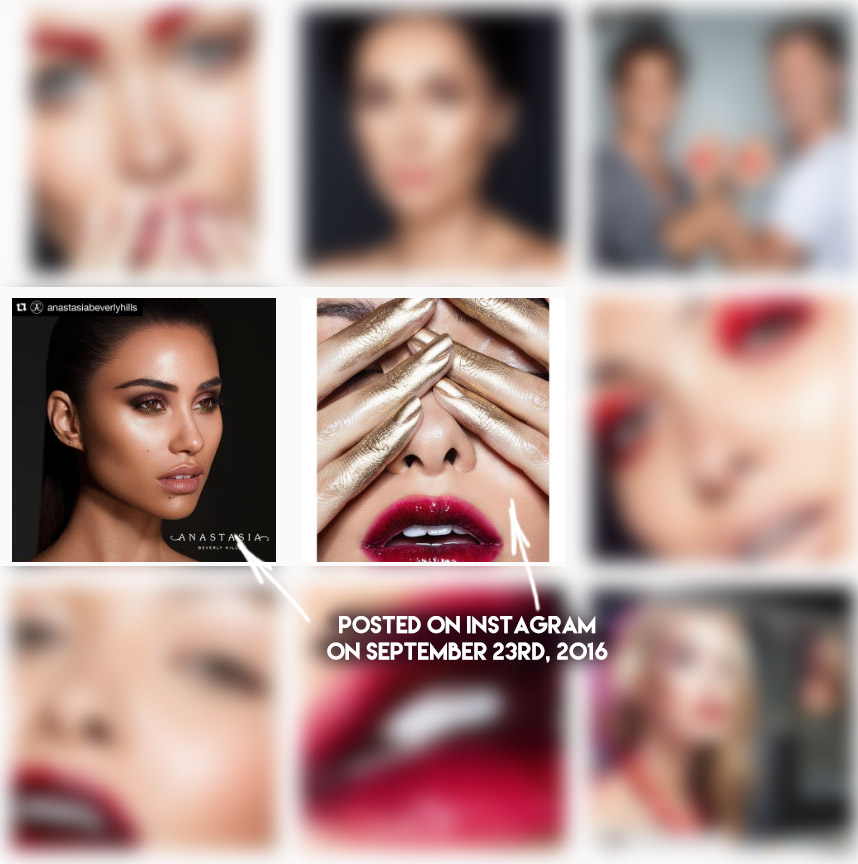 On Saturday night, Vlada sent me a link to the new images posted by @kyliecosmetics. This campaign was shot by the very same photographer whom I tagged a couple of times in the past couple of months when reposting my retouching work for Anastasia Beverly Hills.

My initial reaction was emotional, and my Instagram post contained harsh words such as “pathetic knockoff”. I was in shock and disbelief. I am not proud of that, and I removed them shortly after I posted it and apologized to the photographer, he accepted my apology about using those words. But the issue is still there, whatever you name it.

You may call it a coincidence.

You may say that the Ombré on the lips is different… let me show you this post by Vlada, dated September 8th, 2016.

Only 18 images back from the Speak No Evil image that she posted much later than I did:

DID KYLIE REALLY KNOW ABOUT ALL THIS?

But after Vlada and I posted the comparison images, Kylie Cosmetics campaign photographer Marcelo Cantu posted a comparison between his own older image and my recent work, implying I copied him: “Ideas in art get recycled all the time… these are similar but both beautiful.” 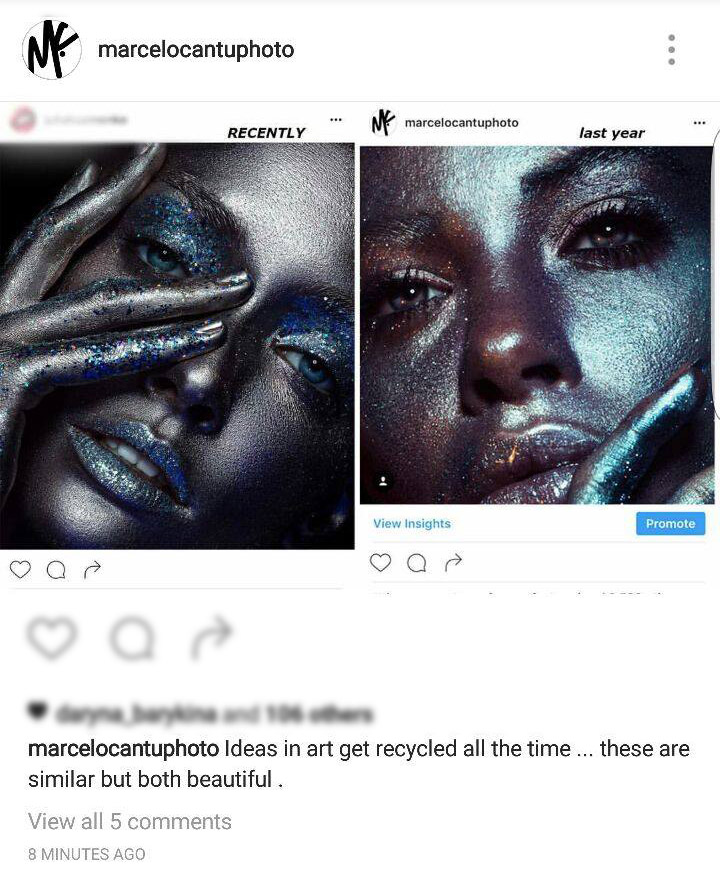 He removed it later that night after comments about how “ridiculous this defense attempt” made him look started rolling in:

This is not the first time Vlada has had an issue with Kylie Cosmetics:

Other artists and brands have also accused Kylie of copying their kits, looks and makeup formulas:

It breaks my heart to see how large brands take independent, unprotected artists’ work and use them to multiply their wealth.

In an ideal world, big brands would easily prevent such backlashes by:

A. Hiring the artists who have already created something that they would love for their own campaigns. In our case, we are not even in a different city – we are here, in Los Angeles, just a call or an email away. Some companies do so and I applaud those brands for giving a chance to the talented underdogs.

B. Simply adding “Inspired by such and such” in the captions when sharing their images that are so similar to the lesser known artists’ work.

As of now, Monday morning, not even 48 hours since Kylie Cosmetics image was released, there are articles about our incident in:

We are very thankful to everyone who saw this issue for what it is and supported us.

Only does it really help us independent artists on a global scale.

Or is this publicity only beneficial for Kylie Cosmetics?

We’re happy to share that the issue has been resolved.

Thank you every one of you, creative people, who supported us! 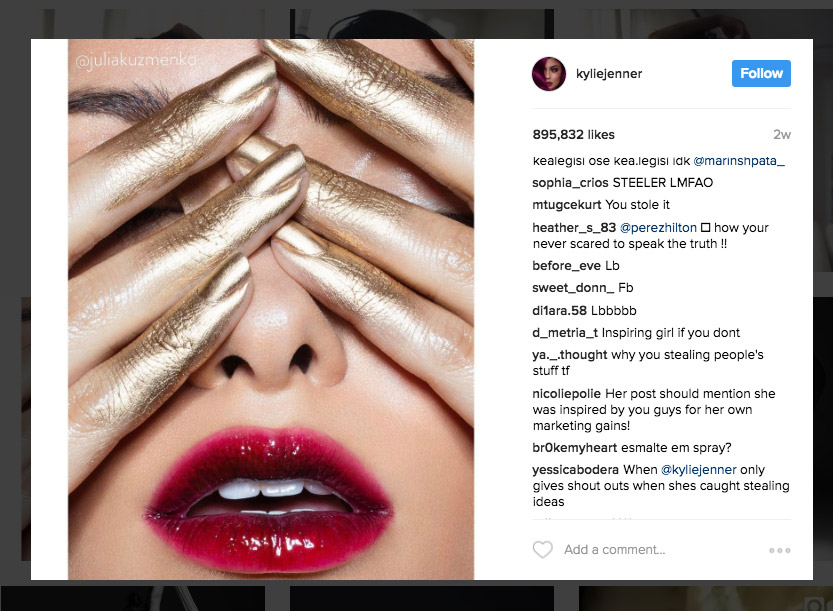 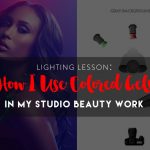 Lighting Lesson: How I Use Color Gels in My Studio Beauty WorkLighting, Photography 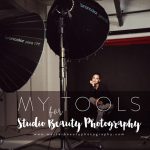